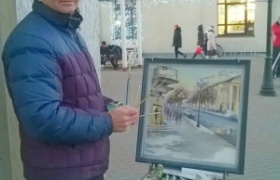 The Radzivil Palace in Palanechka

The Palace in the village of Palanechka is an architectural monument of Classicism. It is a two-storeyed palace with one-storeyed side wings. The central pediment has been lost. What makes the architecture of the palace unique is the window frames and six pillars decorated with herms – carved stone heads designed in antique style.

Palanechka, as the estate belonging to the ancient Belarusian clan of the Dusecky –Rudomins, appeared on the map in the 16th century. Later, at the end of the 17th century, the magnates’ residence was built there.

In 1773, Macey Radzivil (1749-1800), a statesman and public figure, composer, poet and dramatist, made Palanechka his residence. He wrote a number of musical and dramatic works for the Nesvizh Theatre, including the libretto of the first Belarusian opera “Agatha, or the Master’s Arrival (1784).

In 1777, the Russian satirist Denis Fonvisin and his wife stayed in Palanechka on their way from Moscow to Paris.

After Macey Radzivil’s death in 1800, his estate was inherited by his children, Constantine and Antonina.

Constantine Radzivil (1793-1869) began the construction of a palace-and-park ensemble designed in Empire style after an Italian villa in Trivuasino.

The palace-and-park complex consisted of a tomb chapel, a conservatory, a park with a scenic system of water reservoirs and a two-storeyed palace with side wings.

Duke Constantine did a lot to develop culture and education in the area. He authored ethnographic collections and pioneered the first in the area turbine mill built on the river Zmeika.

After Constantine’s death in 1869, Palanechka passed into the hands of his son Macey but he chose to live in his Polish estate Zagzhe near Warsaw where he brought all valuable things from Palanechka.

In late 19th century, Albert Stanislav Radzivil moved into the palace where he lived until World War One. On his orders, a Winter Garden in neogothic style was added to the rear side of the left pavilion. In 1919, Albert left for America giving his palace to his nephew Vladislav who owned it until 1939.

During the years of Soviet power, the authorities changed the layout of the complex completely by housing a school there. At present, the palace is not being used.