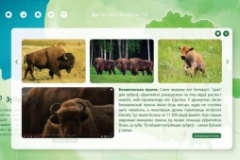 The memorial chapel on the site of the Battle of Milavidy fought between C. Kalinousky rebels and tsarist troops on May 22nd, 1863, was erected in 1930-1933 and stands 1.5 km from the village of Milavidy, on the Brest highway.

During the national liberation uprising of 1863, near the station of Milavidy, which served as the base of one of the rebel detachments, there was a considerable concentration of rebel forces – nearly 800 men. On May 20th 1863, Constantine Kalinousky arrived there, and two days later the rebels under the command of Alexander Liankievic engaged in battle with the punitive troops at Milavidy causing them considerable damage.

The Battle of Milavidy, one of the largest on the territory of Belarus during the national liberation uprising in January 1863, is commemorated by a rotunda chapel built in neoclassical style (1933), a monument in the shape of a cross and a boulder (1988).